Structural engineer Fazlur Rahman Khan (1929 — 1982) ushered in a renaissance in skyscraper construction during the second half of the 20th century. He was a pragmatic visionary, establishing structural systems that subsequently formed the basis of high-rise design: the framed tube and the tube-in-tube, the trussed tube, the bundled tube, the composite system utilizing both concrete and structural steel.

The series of progressive ideas that Fazlur Khan developed for efficient high-rise construction in the 1960s and 1970s was validated in his own work. His design for Chicago’s 100-story John Hancock Center established the trussed tube system, his design for the 110-story Sears Tower (the world’s tallest building from its completion in 1974 until 1996; the building is now called Willis Tower) initiated the bundled tube system.

Fazlur Khan epitomized both structural engineering achievement and creative collaborative effort between architect and engineer. Only when architectural design is grounded in structural realities, he believed — thus celebrating architecture’s nature as a constructive art, rooted in the earth — can “the resulting aesthetics . . . have a transcendental value and quality.”

He was always clear about the purpose and responsibility of architecture. Khan’s characteristic statement to an editor in 1971, having just been selected Construction’s Man of the Year by Engineering News-Record, is commemorated in a plaque in Onterie Center (446 E. Ontario, Chicago): 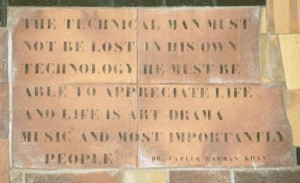 “The technical man must not be lost in his own technology. He must be able to appreciate life; and life is art, drama, music, and most importantly, people.”