A Career Marked by Innovation

The years of Fazlur Khan’s career, from the late 1950s to the early 1980s, saw significant changes in building design. And whether it was the implementation of computer technology, advances in structural materials, or the understanding of wind and its effects, Khan had a central role in the progress achieved in his field. Foremost among his contributions was his development of influential structural systems for high-rise design.

Before the 1960s, even the tallest buildings relied on structural systems — the shear truss or shear wall system or the beam-column frame — that could not efficiently provide lateral support to buildings over 20 to 30 stories. It was a generally accepted “fact” of construction that taller buildings cost more to build per square foot of rentable floor area than shorter buildings. As the effects of wind pressure rapidly increased with increasing building height, a tower’s structural framework had to be strengthened and stiffened considerably. In the decades following the Depression this structural cost premium dissuaded developers from building above the 30-story range. Although demand for space was growing, developers leaned instead toward constructing site-consuming structures to provide floor area.

This approach was tolerable before the 1960s, but population growth in the first half of the 20th century capped by the 1950s’ baby boom intensified people’s sense of an earth that was shrinking. Metropolitan centers in particular were pressed for space. Housing was needed for a large number of people — single-family homes were not sufficient — and office space was also wanted for the increasing number of office workers. A healthy economy ensured a sustained demand for office space. It appeared that conditions in central business districts were bound to worsen as more office space was built, with every building site being completely filled.

High-rise construction offered a solution. Tall buildings would provide large amounts of floor area without having to be densely packed, one building upon the next. Urban space could be left available for desirable city plazas and parks. But expense proved a critical deterrent. Skyscrapers were simply too costly by modern development standards. A tower reaching as high as the Empire State Building could no longer be justified in economic terms.

The revolutionary framed-tube structural system was first seen in the construction of the Chestnut-DeWitt Apartments.

Fazlur Khan’s earliest developments — the shear wall frame interaction system, the framed-tube structure, and the tube-in-tube structure —led to considerable improvement in structural efficiency, thereby making the construction of tall buildings economically feasible. The framed-tube structure has its columns closely spaced around the perimeter of the building, rather than spaced throughout the floor plan, and stiff spandrel beams connect these perimeter columns at every floor.

This structural system was initiated in 1964 in the construction of the Chestnut-DeWitt Apartments in Chicago, a 43-story reinforced concrete tower designed by Khan and his colleagues at Skidmore, Owings & Merrill (SOM). Because of its great relative strength and stiffness, the tubular form immediately became a standard in high-rise design. 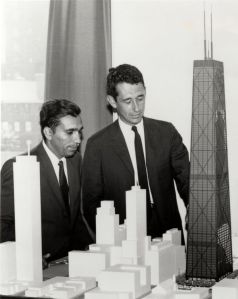 Fazlur Khan and Bruce Graham with a model of their design for the John Hancock Center.

As the reach of tall buildings extended, Khan sought innovative structural systems appropriate for each new scale of architecture. For Chicago’s 100-story John Hancock Center he developed an exceptionally efficient trussed tube structure. Working together with Bruce J. Graham, chief design architect in SOM’s Chicago office, in 1964-1965, he expressed this perimeter trussed-tube structural system in an articulate, gracefully tapering building form. Construction of the building was completed in 1970.

In 1960, buildings over 20 stories were still newsworthy; by the close of the decade, people were “living in the sky.” Apartments in the John Hancock Center in Chicago are located as high as the 90th floor.

In 1969-1970 Fazlur Khan introduced another groundbreaking structural system, the bundled tube, which he initiated in the Sears Tower design. The design for Chicago’s 110-story, 1,450 foot tall Sears Tower (now called the Willis Tower) provided more space and rose higher than the Empire State Building, yet cost much less per unit floor area. Equally significant, the bundled tube structure now made it possible to vary from the common box-like building form. Although the Sears Tower is made up of nine square tube units bundled together for a 3-unit by 3-unit square building footprint, the bundled tube structural system’s tube units do not need to be square. Tube units can also be bundled together to form different building forms.

Looking up at the Sears Tower, the world’s tallest building for over twenty years. The design for this 1450-foot-tall tower introduced the bundled tube structural system, as well as a new vocabulary in architectural form.

When one looks at a text on tall building design today, one finds these recognizable structure types: the framed tube, the shear wall frame interaction, the trussed tube, the bundled tube, and the composite system (also developed by Fazlur Khan). Though Khan developed structural systems for particular project needs, he based his innovations on fundamental structural principles that allowed them wide application.

As the building boom in the West came to an abrupt halt in 1974, new demands surfaced that thrust designers into unfamiliar settings. Clients in the Middle East and Asia, for example, were anxious and now financially able to construct housing, offices, and other facilities in large scale. SOM took on this design work, and Khan responded to needs and situations as he perceived them.

For the immense roof of the Hajj Terminal of the new airport in Jeddah, Saudi Arabia—intended to shelter 80,000 pilgrims at a time, waiting for up to 36 hours—he searched for a coherent scheme that both was efficient and honored the spirit of the Hajj pilgrimage.

Stamp honoring the Hajj Terminal design. The magnificent fabric roof and the space that it creates at once awes and comforts terminal users. The Hajj Terminal received the 2010 American Institute of Architects Twenty-Five Year award, which “is conferred on a project that has stood the test of time for 25 to 35 years as an embodiment of architectural excellence.”

The fabric roof structure that developed melds a traditional concept, that of the Bedouin tent, with sophisticated technology. The fabric itself was developed to meet stringent requirements so as to serve as a structural material, rather than having to rely on cables for its full support. Similar to Khan’s development of high-rise structural systems with wide application beyond a particular building design, the design for the Hajj Terminal advanced the state-of-the-art of tensile structures and facilitated the use of fabric as a structural material in a range of projects. Construction of the terminal was completed in 1981.

link to “Gateway To Mecca” article, from Faith & Form

4 Responses to A Career Marked by Innovation