Fazlur R. Khan was born in 1929 in the region of British India known as East Bengal. In 1947 Britain relinquished control of the Indian subcontinent and East Bengal became East Pakistan. Twenty-four years later, in 1971, the people of East Pakistan separated from West Pakistan and gained their independence, founding a new nation, Bangladesh.

The struggle for independence in 1971 began as a movement for autonomy. When the two regions of British India with a Muslim majority had joined to form one country as East and West Pakistan in 1947, the central government was based in West Pakistan. A thousand miles across India separated the two regions, however; they had very different cultural heritages and no common local language. Economic issues became even more divisive. Notwithstanding the larger number of people residing in East Pakistan, West Pakistan consumed the majority of foreign exchange earnings, foreign aid, and federal spending. Disparity in per capita income between east and west widened accordingly.

Government assistance for East Pakistan following natural disasters was also notably inadequate. Because of the region’s high population density, its low-lying riverine terrain, yearly monsoon rains, and ocean storms, the land was regularly subjected to flooding. In August 1970 the monsoon rains were unusually heavy, causing extensive damage and many deaths. Then, in November of that year, the worst cyclone of the century crashed into the mouth of the Ganges River in Bengal. The death toll this time was considerably higher, estimated at 300,000 people. Following both catastrophes, the central government provided minimal aid relief.

In December 1970 unprecedented free elections were held in Pakistan. The martial-law administrator and self-declared president, General Yahya Khan, held the elections with the expectation that, given the numerous declared parties in East Pakistan, a West Pakistani party would win controlling power. Incited by their experience that year, however, East Pakistanis unified to support one party, the Awami League, and gave it an overwhelming majority in the National Assembly. Faced with these unexpected election results, the leader of the West Pakistani party refused to form a government with the Awami League, and General Yahya Khan declined to reconvene the National Assembly. Elation in East Pakistan devolved into frustration and then activism in the form of demonstrations and general strikes.

Stalling, the government offered to enter into negotiations. It was making other plans all the while, aiming to put a halt to East Pakistan’s growing movement for autonomy. When the military launched a vicious assault on the people of East Pakistan in March 1971, the opportunity for east and west to move forward as one country was lost.

The assault began on the evening of 25 March 1971, as tanks and soldiers headed to the student dormitories at the University of Dacca (now Dhaka). Besides students, the military’s initial targets were professors and other intellectuals presumed to favor autonomy for East Pakistan. Local barracks and police stations whose support of the central government was uncertain were additional targets. The military assault was not confined to the capital, however, and soon spread beyond Dhaka into the villages.

Those who could escape fled to neighboring India. By early July six million refugees were estimated to be taking shelter in India; by December the count reached ten million.

Meanwhile governments around the world hesitated to react. In the U.S., the Nixon Administration denied the reality of the situation in East Pakistan and continued to support the military dictator and to send military supplies.

Desperate to effect change in the policies of their governments, individuals organized to form nongovernmental groups that could disseminate information about the plight of the people of East Pakistan. In the U.S, this effort began with East Pakistanis residing around Washington DC and New York. As they worked to establish an organization to assist their homeland, they contacted Fazlur Khan, who was known in the Bengali community by this time, about efforts in the Chicago area.

He agreed to take a central role and became the founding president of two organizations based in Chicago: one, the Bangladesh Emergency Welfare Appeal (BEWA), to appeal for assistance and collect funds for humanitarian purposes; the other, the Bangla Desh Defense League (BDL), to support the emerging defensive forces, the “freedom fighters,” and to lobby in Washington DC to end U.S. support for the military government in West Pakistan.

Khan’s intense involvement in these efforts was all the more remarkable in light of the new and demanding responsibilities he was assuming at Skidmore, Owings & Merrill (SOM) in this same period. He had just been made a full partner in SOM in 1970, and in 1971 he was working on the design of the 110-story Sears Tower, along with numerous other projects as general partner and chief structural engineer in the firm.

He designated his office at SOM as the official address for both BEWA and BDL. He talked with colleagues about the crisis in East Pakistan and recruited clients and architects to join as founding officers and advisors (among them Stanley Tigerman, William Hartmann, Gerald Hines, John Tishman, and Bernard Weissbourd). 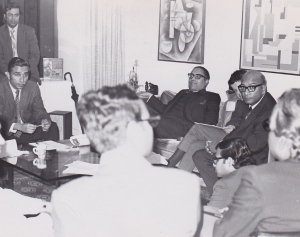 Likewise, his home became a central meeting place for these groups, with people gathering in his living room many weekends. Despair and fear, along with a sense of helplessness, were forefront, as many of the people involved had family and friends in East Pakistan; Khan, as well. His brother, who was teaching that year at the university, had been able to get out of Dhaka but his mother and sister remained. Despite the tension surrounding these meetings, participants were motivated by Khan’s ability to create an environment of purposefulness and unity. Ralph Nicholas, one of the many non-Bengalis who devoted great effort to this cause, remembers how Khan’s patience overcame the difficulty of bringing together people of far-ranging background, temperament, and personal interests. He was respected as an elder brother, and he “made everyone feel they had a contribution to make.”

Although the military blocked news reports from East Pakistan, the number and the condition of refugees streaming into India was undeniable. In September 1971 Senator Edward M. Kennedy, chairman of the U.S. Senate Subcommittee on Refugees and Escapees, traveled to India to visit the refugee camps and witnessed “a scene,” he subsequently reported to the senate, “which only can be described as the most appalling tide of human misery in modern times.” Struggling to alleviate the poverty of her own people, India suffered this onslaught of refugees from March through December 1971. “As a river overflows its banks during floods,” the Prime Minister, Indira Gandhi, eloquently described the period, “so a vast and endless stream of people entered our land from across the borders.”

Skirmishes between Pakistani and Indian troops at the borders were frequent, and the prospect of war between the two countries threatened throughout the fall. Finally, on 3 December 1971, Pakistani air strikes on Indian airfields initiated a state of war between India and Pakistan. Prepared for this moment and assisted by Bangladeshi freedom fighters, the Indian army moved into East Pakistan from three sides. The India-Pakistan confrontation in East Pakistan lasted less than two weeks, securing the independence of Bangladesh. According to Bangladesh government estimates, three million people died in East Pakistan in 1971; other estimates have ranged from one and one-half to two million people.

“I feel very tragic about Bangladesh,” he told a reporter for Engineering News-Record in 1972. “The killing and the suffering there has affected me deeply.”
He was interviewed for an article about him, “Construction’s Man of the Year: Avant garde high-rise designer Fazlur R. Khan,” in Engineering News-Record, February 10, 1972 issue

With the emergency in Bangladesh ended, the organizations abroad that had been created to counter the occupation had no further purpose. The Bangla Desh Defense League was dissolved. Members of the Bangladesh Emergency Welfare Appeal, however, believed that a continuing crisis existed, caused by the elimination of educated and professional people, potential leaders of the nascent country; by trauma among survivors; and by malnutrition, causing mental and physical disabilities in young children that would affect the next generation. BEWA’s members decided to convert the temporary association into a permanent foundation, named the Bangladesh Foundation, to support efforts such as educational and training programs, small-scale and cottage industries and cooperatives in villages, and the operation of health care facilities.

The Bangladesh Foundation set up a local office in Dhaka to function as a conduit for receiving and funding grant proposals; Muhammad Yunus (who would later found the successful Grameen Bank) returned to Dhaka after completing his graduate studies in the U.S. and became the office’s first resident director.

During his trips to Bangladesh in the 1970s Fazlur Khan visited grant applicants and recipients and followed their progress. As one grant recipient, Dr. Zafrullah Chowdhury, recalled years later, Khan’s thoughtful consideration and ideas were as much appreciated, and helpful, as the funds the foundation provided.

Based on “Crisis in Bangladesh,” pp. 259 – 265, in Engineering Architecture: The Vision of Fazlur R. Khan